13. What Is Animal Cruelty and How Can We stop it For Good?

13. What Is Animal Cruelty and

How Can We stop it For Good? 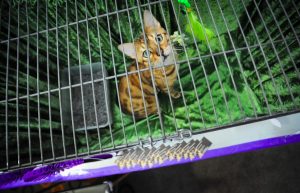 Animal cruelty is real and pervasive. It happens to all different types of animals and in every corner of the world. It’s also preventable and unnecessary.

Every 60 seconds, an animal gets abused. That’s unconscionable, especially in our advanced culture, but animal cruelty continues to occur all over the world. Animal cruelty can take many different forms, but the impact is always the same. And it needs to stop.

The problem is that there aren’t enough people fighting for animal rights. If everyone started to look at animals — and not just dogs and cats — as fellow animals who share our planet, we would see far fewer cases of cruelty toward animals.

First, though, we have to spread awareness. What is animal cruelty? What does it look like? And how can we stop contributing to it?

Animal cruelty is the abuse toward or neglect of an animal. It’s that simple. Some aspects of animal cruelty involve purposefully putting animals in situations that harm, scare, and terrorize them, while others simply result from people looking the other way.

In some cases, animal neglect stems from ignorance. A person keeps an animal on his/her property and doesn’t know how to properly care for that animal. This isn’t a justification for the neglect, but a recognition that we need to educate people about the animals in their care.

Neglect can also stem from disinterest. If a dog owner notices that the animal has sustained an injury, he or she is morally and legally obligated to obtain veterinary care. Unfortunately, some people are unwilling to spend the time and money necessary to heal their sick or injured pets.

Similarly, a companion animal might go days or weeks without food because the owner “just forgets.” That’s not an excuse. Every day, emaciated, diseased, flea-ridden animals enter shelters. Some get adopted by loving families. Others aren’t so lucky.

Worse, some animals spend their entire lives in neglectful circumstances. They eventually die of dehydration, malnutrition, untreated diseases, or other conditions.

Some people believe that animals truly don’t emote. They believe that human beings are the only animal on earth that can feel pain, fear, sadness, joy, despair, and hope. Those people are wrong. Anyone who has pets can attest that animals absolutely feel emotions. They experience joy when they get to play with a new toy, pain when they injure themselves; fear when they’re confronted with a new experience, sadness when someone they love dies. But emotions aren’t limited to dogs and cats.

As more people become aware of animal cruelty, we’ll have more power to stop it.