The sailor for the sea.

We are closer than ever to the extinction of the North Atlantic right whale. Fewer than 450 whales survive today.

Hunted since the 11th century, right whales were nearly extinct when they finally received protection from whaling in 1935. Even so, the population has struggled to recover as they face mounting modern-day threats from fishing gear entanglements, vessel strikes, habitat loss, and pollution. Since its incorporation in 2005, WDC’s North American office has run a dedicated program to save this imperiled species and implement protective measures to save right whales from those threats. For example, WDC has worked to develop and implement rules to reduce ship strikes, successfully reducing the risk of a fatal collision by 80-90% in US waters, and to increase federally designated critical habitat to cover nearly 40,000 square miles of the US East Coast.

We at Whale and Dolphin Conservation (WDC) recognize the importance of the fishing industry and emphasize that there is no intent from fishermen to harm whales. Yet this accidental bycatch of whales and dolphins poses the single largest global threat to marine mammals. Here in the Atlantic, WDC holds a federally appointed seat on the Atlantic Large Whale Take Reduction Team, where we work with fishermen, conservation groups, scientists and state and federal agency, representatives 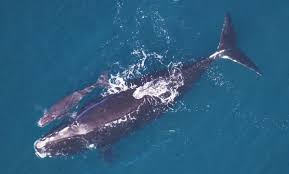 to address this complex threat.

Through this collaborative process, regulations to reduce the profile of ground lines and the number of buoy lines have been implemented along much of the coast.

Researchers have found the role of whales so significant that they concluded that the “full recovery from one serious anthropogenic impact on marine ecosystems, namely the dramatic depletion of whale populations, can help to counter the impacts of another now underway—the decline in nutrients for phytoplankton growth caused by ocean warming.” In simpler terms, allowing whale populations to recover can help fight climate change. If you’re reading this and wondering why we need to protect whales, the answer is that humans need whales.