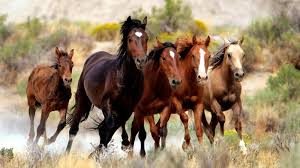 “The Bureau of Land Management (BLM) recently announced that it again intends to move forward with inhumane surgical sterilization experiments on wild horses. This is the fourth time the agency has tried to implement a controversial, risky, and outdated procedure known as “ovariectomy via colpotomy” on wild mares. The surgery involves blindly inserting a rod-like tool with a chain at the end to sever and remove the animal’s ovaries”.

”The National Academy of Sciences explicitly warned the agency not to utilize this method due to risks of trauma and infection, and two major academic institutions–Oregon State University and Colorado State University–previously withdrew their affiliation with the experiments in response to massive public outcry”.

“The BLM tried to implement the ovariectomy plan on its own last fall, aiming to conduct up to 25 surgeries a day, including on pregnant mares in order to quantify the incidence of aborted foals. AWI went to court and successfully secured a preliminary injunction to stop the BLM from proceeding at that time. Unfortunately, the BLM remains bent on pursuing mass surgical sterilizations on wild horses so have published a new proposal that is open for public comment”.

Wild horse advocacy groups are hailing an announcement today by the Bureau of Land Management (BLM) to officially abandon any plans to use mares rounded up from Oregon’s Warm Springs Herd Management Area (HMA) for cruel surgical sterilization experiments. Now the BLM is seeking public comments on its plan to return a portion of the wild horses back to the range, after removing the entire population in a mass roundup last fall.

The American Wild Horse Campaign, the Animal Welfare Institute, The Cloud Foundation and some members of the BLM National Wild Horse and Burro Advisory Board, and photographer sued to stop the sterilization experiments, which involved performing an outdated surgical procedure, ovariectomy via colpotomy, described by veterinarians as unscientific, inhumane and dangerous.

In November of 2018, a federal judge issued a preliminary injunction to stop the federal agency from its cruel and controversial plans.