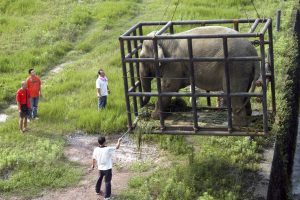 One of the leading buyers of African elephants could face difficulty in acquiring the mammals if a widening of a ban on their sale to zoos is ratified by the global regulator of wildlife trade.

The sale of elephants from West, Central, and East Africa is already banned – but there is a lower level of protection for them in southern African countries such as South Africa, Namibia and Zimbabwe, which are the top three exporters of wild elephants to overseas zoos, according to Cites.

It will no longer be legal for wild baby elephants to be snatched from their families and exported to zoos around the world after Defra ministers persuaded the EU to vote for a ban.

“By adopting this ban today countries all around the world have shown that animal welfare legitimately justifies severely restricting trade and it can take precedence over economic interests,” “We trust that this will be taken into consideration in future decisions.”