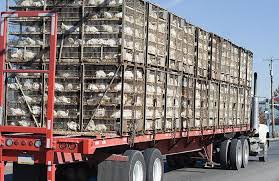 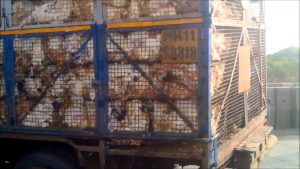 After cats, dogs, and fish, birds are the fourth most popular type of companion animal. It is estimated that 12 million birds are kept caged and often improperly cared for by owners who are not educated to the needs or requirements of an exotic bird. Birds have long life spans with some species living from 50-60 years of age. Captive Bird abuse is not just a violent act towards a bird, but also includes neglect and failing to provide for the bird’s general well-being. This covers an array of circumstances, including leaving the bird unattended for long periods of time, lack of adequate food and water, hoarding, or failing to provide veterinary services as needed.

“Undercover investigations at federal poultry slaughter plants over the past decade have documented numerous instances of intentional abuse to animals, including throwing birds against walls, burying live birds in piles of dead birds, breaking birds’ legs by violently slamming them into shackles and jabbing birds with metal hooks to remove them from their cages”.

“The Animal Welfare Institute (AWI) has reviewed records supplied by the US Department of Agriculture (USDA), revealing evidence of mistreatment of birds destined for slaughter. One, especially concerning problem identified by AWI, is the suffering and death of large numbers of birds because they were knowingly neglected or abandoned for extended periods at the slaughterhouse or en route to the slaughterhouse. The problem appears to be particularly acute during extreme weather conditions”.

“Examples of mistreatment described in the records include birds loaded in high temperatures without the use of fans or misters, birds transported in low temperatures without covers on the trucks, birds held at the slaughterhouse without protection from extreme heat or cold, and birds held for slaughter for several days without food, water, and adequate shelter. Many of these incidents appear to violate state animal cruelty laws”.

“More than two years ago, the Animal Welfare Institute alerted the USDA to concerns over intentional neglect or abandonment of birds. Two years prior to that, AWI and Farm Sanctuary petitioned the USDA to regulate the handling of birds at slaughter. The petition explains that the USDA not only has the authority to regulate how birds are treated, it is also legally obligated to do so to prevent the adulteration of poultry products. Unfortunately, the department has failed to act and, consequently, the suffering of birds at slaughter continues”.