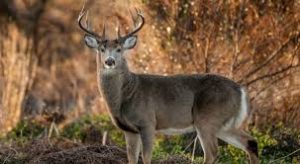 A disturbing video posted to social media, believed to have been filmed in Brookville, Pennsylvania, shows two hunters torturing an injured deer they shot. The men appear to be laughing while they yank the suffering animal by his antlers, stomp on him with their boots, and kick him in the head and face. The deer looks to be lying in a pool of blood.

The shocking footage – which has since been removed from social media – shows the two teenagers kicking the injured buck in the face and stamping on its legs, all while laughing.

After the animal appeared to have died, the teens could be seen ripping off its antlers and skinning it.

“The PACT Act established the first federal prohibition on animal cruelty and torture. By the account of anyone who watched the heinous video that circulated on social media last weekend, these two individuals viciously tortured an innocent animal and should be prosecuted to the fullest extent of the law.

“Right now, law enforcement is investigating this issue, so it would be premature to offer additional comment at this time.”

A petition calling for the ‘maximum sentencing of the monsters’ who tortured a deer to death has been signed by more than half a million people after a sickening video of their act was posted on Snap chat.

More Than 500,000 People Sign Petition for ‘Maximum Sentencing of Monsters’ Who Tortured Deer to Death.